The European Path, E4, is one of the many Pan-European routes established by the European Union some years ago, which goes through all of its member states. The E4, covering thousands of kilometers of trails, passes through many European countries and ends its long and wonderful course in the Prefecture of Lassithi.

Here, the walker will encounter one of the most pristine and undisturbed corners of both Greece and all of Europe. High mountains, valleys and gorges, living and forgotten villages, monasteries and archeological sites are awaiting, all ready as a reward for this lengthy and laborious journey, creating a lasting impression on one's mind.

In this the last part of E4, the trekker will not encounter alpine level difficulties. This does not mean, however, that it is possible to go through all of its sections without good equipment and some degree of physical fitness. Trekking boots, waterproof clothing, a large rucksack, water canteens, (in mountainous areas during the Summer the absence of spring water could be very dangerous), are some of the necessary components of this equipment. Due to the fact that along many sections of E4 there are no pensions or shelters to stay overnight, it would also be opportune to bring along a sleeping bag or tent.

The trekker's navigator and companion are the signs associated with E4 that are placed on top of metallic poles. The signs and poles have the same colour combination of yellow and black. In some places the signs have fallen off their poles, and in others, the signs have been nailed to tree trunks or electricity poles. There are, however, some few trails where there are no signs at all, but here black and white, as well as red signs have been painted onto rocks and stone slabs.

The best trekking maps on the market are on the scale of 1:100,000-some of which indicate the location of the E4 Path. 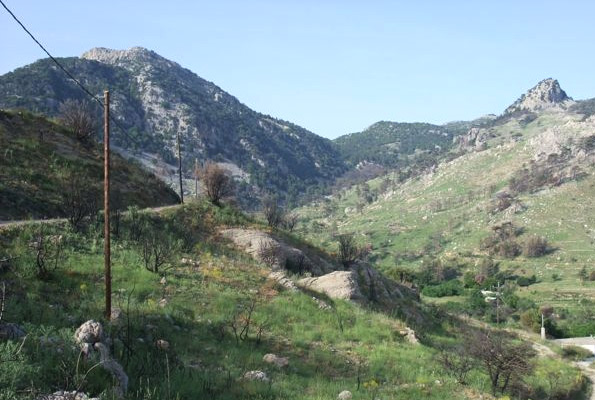 The E4 Path enters the Prefecture of Lassithi from the western side of the Dikti Mountains. Leaving the village of Kostanomitsa and the settlement of Tihos, it climbs the old Venetian Trail towards the Plateau of Lassithi. From the summit you can enjoy the magical scenery of the largest Plateau in Crete below. Ascending the asphalt road towards the village of Kato Metochi, go through it and towards the next village of Aghios Haralambos.E4 now becomes a dirt road. Continuing on you arrive at the village of Psichro, where you can visit the cave in which, according to mythology, the god Zeus was born. Leaving this village, move onwards along the trail towards the villages of Aghios Georgios and Koudoumalia. All of these villages are found within the Plateau of Lassithi and at an elevation of 900 metres. Now your ascent begins, a total of approximately 950 elevation metres. Exiting the village of Koudoumalia, you can enjoy the last view of the Plateau, before reaching another much smaller plateau : the Plateau of Limnakaro. Passing by the church of Our Lady, you should take the opportunity of filling your canteens at the nearby farmhouse. On the right slope of the mountain, you can see the shelter "Strovidi" hat belongs to The Climbing Association of the Plateau of Lassithi. The dirt track goes through the small Plateau of Limnakaro and continues uphill to the summit of Seli, which is the highest point of the route at 1800 metres. You will need a total of 3.5 to 4 hours from the village of Koudoumalia to get here. Five minutes before the summit, on your right, you will find the spring of "Avarsami". Here begins the downhill path towards the settlement of Selakano and the magnificent pine forest that is one of the few remaining in the Prefecture 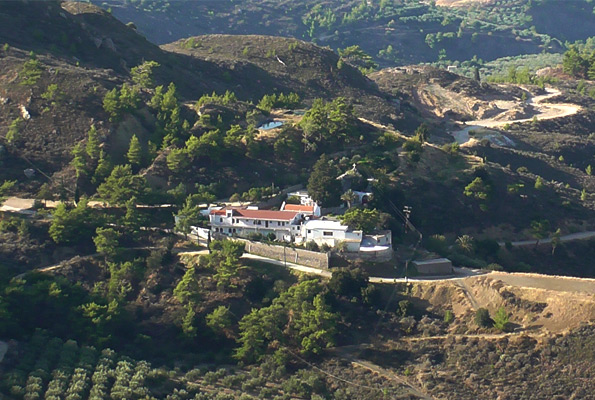 At the entrance to the settlement of Selakano, follow the dirt road to the left which leads to the settlement of Mathokotsana, which you pass through to the end. Caution must be exercised here because of the many junctions to the left and right, and the signs must be strictly followed. The dirt road goes above the large village of Males but not through it. To your left and right there are enormous pine trees and holm-oak frees. Looking to the right and below, you can admire the view of the Libyan Sea and the town of lerapetra. Continue along the various dirt roads until you reach the asphalt road which leads to the village of Prina, one kilometre away. Leaving Prina, take the dirt road that goes to the small village of Meseleri, where the pine forest ends. Go through the village and continue uphill, passing by the monastery of Vriomeni located above the village of Stavros. The dirt road continues and meets with another dirt road, which comes from the settlement of Asari. Here under the huge planetree, you can rest and fill up your canteen with water. From this spring, you continue northeast on the downhill dirt road towards the village of Vasiliki, which is surrounded by countless olive tees. 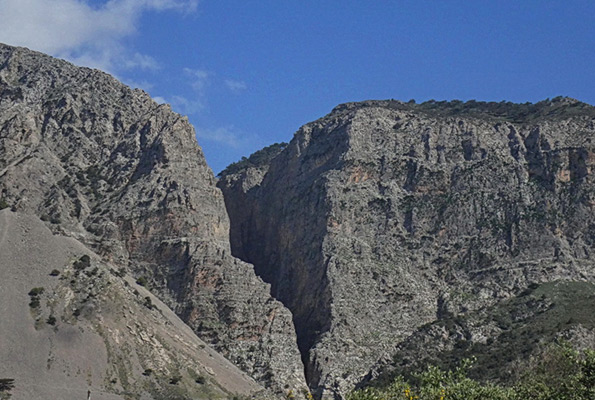 After going through the small village of Vasiliki, follow the asphalt road that leads to the lerapetra-Aghios Nikolaos highway. Cross over this highway to the other side to take up the dirt road that leads to the small village of Monastiraki. Pass through the village going uphill along the rough dirt road following a southeasterly direction. At a marked point turn left, leaving the dirt road behind. Now you are on an uphill trail that eventually leads to the dirt road that comes from Kato Chorio and continues on to the mountain village of Thripti. On the left below is one of the most accessibly difficult gorges of Crete, the Gorge of Ha (climbing equipment mandatory). Continue uphill until the village of Thripti, gazing down for the last time on the green valley of lerapetra which is located at the narrowest point between North and South of the island. Going through the upper part of the village of Thripti, you pick up the dirt road again. On the right is the tallest peak of the Sitia mountains, the peak of Afentis Estavromenos (The Crufixication of Christ) at 1,476 metres.

Continuing downwards, go through the village and keeping left, pick up a trail that goes uphill towards a large transmission antenna. From this point you head downhill criss-crossing trails and dirt roads until you reach the village of Chrisopigi. Beyond this village, following along the dirt road you will arrive at the village of Daphni. After passing through this village, keep on the dirt roads that pass below the village of Kato Kria and continue onward towards the valley of Lithines. At the lowest point of the valley is the old settlement of Adromili, located in the midst of very tall planetrees. A little below the settlement is the picturesque church of Aghios Apostolos (The Apostles) where there is a water spring. From here, head uphill along dirt roads until the small village of Vouri. From this village, cross over the lerapetra-Sitia highway to reach the village of Papagianades, where you can refresh yourself at the old spring in the village. 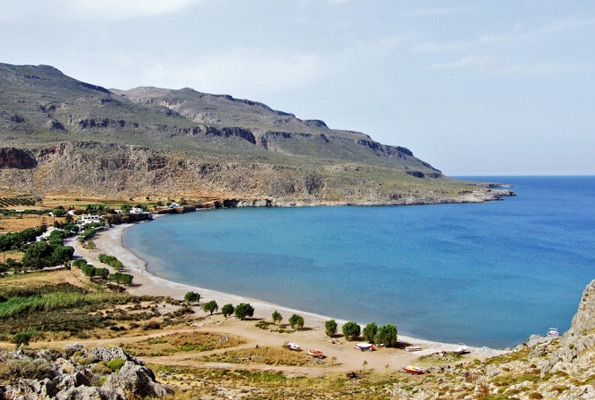 Having passed through the village of Papagianades, walk uphill for 100 metres along the asphalt road to reach a dirt road on the left, which goes uphill to the village of Armeni. To the right you can observe the old settlement of Etia, and the large stone building of Demetzo.Further down along the dirt road, follow the asphalt road from the village of Armetis towards the village of Chandras, continuing on until the large village of Ziros. To the right and left you can see vineyards, and windmills that pump water from wells. Walking towards the left along the narrow laneways of Ziros, you arrive at the dirt road that winds uphill and takes you to the Plateau of Mavros Champos. After a short time, you reach the little church of Aghios Georgios at Skalia, where there is a large stone water structure. The dirt road now goes downhill until it reaches the village of Ano Zakros. Passing though the village, take the dirt road for a short distance, and then follow the path that leads to the magnificent Gorge of Nekron. The red rocks of the deep gorge accompany you as far as the village of Kato Zakros on the eastern coast of Crete.
Here ends the long route that is E4.